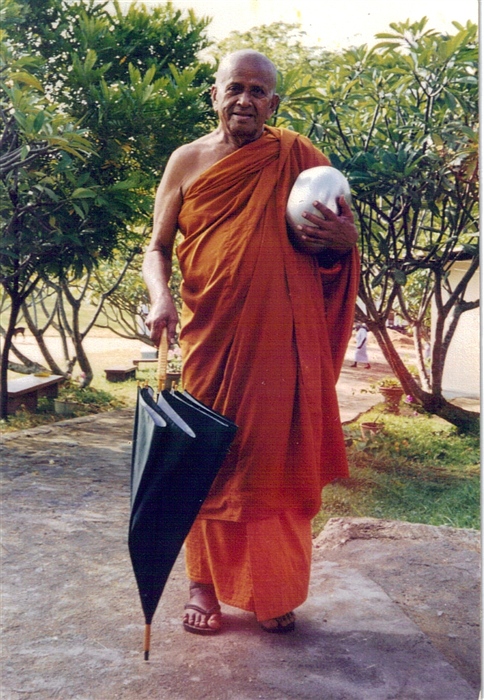 Dhamma Talks given by Venerable Amatha Gavesi of Sri Lanka. He is considered to have achieved the Noble stage during his last years of life.
Venerable Amatha Gavesi Thera was born on December 19, 1918 at Walana, Panadura, Sri Lanka  and started his career as a Police Inspector in 1943. He was honest, and his commanding voice was sufficient to elicit confessions from criminals. He rapidly rose to the rank of DIG and reached the zenith of his career as Director, Police Training College and almost all the DIGs and SSPs of today including the IGP were his trainees. As Director he did everything possible to remove the last vestiges of the colonial iron fist in apprehending criminals and substituted instead compassion to all beings and a Buddhist way of life. He did not spare a single moment in discursive thinking, and while serving as a Director he had a human skeleton in a glass cage installed in his room for him to meditate on the impurities of the human body. He retired prematurely and entered Sasana under the name Amatha Gavesi. He practiced ardently and achieved  phenomenal results.
He was an erudite scholar in Sinhala, English, Pali and Sanskrit and even during his service tenure he practised the Dhamma and deeply meditated whenever possible. His talks hosted here are profound and yet delivers the essence of the Practice in simple English.
May you find his teaching useful tools in carving out the steps leading to your liberation

Uploaded by Ranjith The Dhamma Seeker on October 31, 2015